Three-day weekends are amazing, but sometimes they throw me off… hence my weekly training recap being posted on Monday night instead of Sunday. Today felt like Sunday, and yesterday, we went to the Denver Home and Garden Show and had dinner with my brother and his fiance, so by the time we got home, I chose bed over blogging. I regret nothing. To make up for not posting on schedule, here’s a picture of a firetruck dog made out of flowers at the Home and Garden Show. He’s the cutest.

So anyway, training. This week, Colorado decided that it didn’t want to be February anymore, and the weather skipped right over to April. I don’t blame it, because February kinda sucks. This week was full of 60-degree, sunshiny days, and I was able to get off work early enough to run at least a bit outside every day.

PM: 10 with 5 at tempo. I ran a three-mile warm-up and two tempo miles outside before dark, then hopped on the treadmill and finished the last three at tempo and a two-mile cooldown. It’s not ideal to break up the tempo part like that (it took a few minutes to use the bathroom and cue up a show for the treadmill), but I was NOT going to pass up that weather. 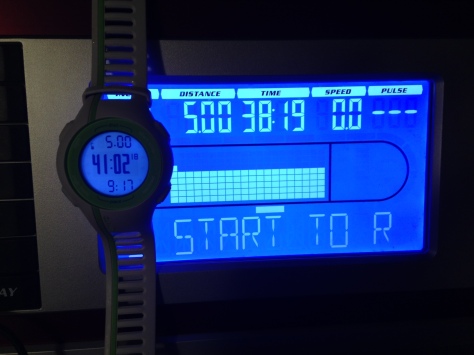 Tuesday:
14 miles — 6 outside, 8 in. These weekday longer runs are a staple of Pfitz plans, and I do think they’ll help me bust that dumb 3:13, but man, they are tough. No grading happens on Tuesday nights right now.

Wednesday:
5 recovery miles, and then core work and some yoga for Sweat Pink and Prana’s #tbringingyogaback Instagram challenge.

Confession: After Wednesday, I gave up on the challenge. The poses got harder, and I got awkwarder (it’s a word; shut up), and I did not wish to show that awkwardness to all the Internet people… especially since those pictures would probably make their way onto my students’ propaganda posters next fall.

Thursday:
I fully intended to get up and go lift, but I slept miserably. As I was lying wide awake at 3:30, I thought, “You know, if I do manage to fall asleep in the next hour, I do not want to get right back up.” So I turned off the 4:30 alarm and did, in fact, manage to go back to sleep. So there was no strength training, but there was an after-work 11-miler, again split between outside and inside, so the day wasn’t a total loss.

Friday:
My longest workday outside run yet this year: 7 miles with strides, followed by some core and stretching.

21 miles, wearing shorts and T-shirt. It was glorious, and I apologize for my bragging to all you East Coasters wading through snow right now. This was my longest run since last September,  so I kept it on the slower end of long run pace, and even stopped to say hi to some cattle.

Sunday:
Rest day. I was glad of it, since the weather decided to be all Februaryish again and snow and blow. I really should have done some yoga before we left for Denver, though, because my hips were whining all day. I told them to shut up and quit being baby hips, but they didn’t listen.

Totals: 68 miles, 1.5ish hours strength training/stretching — slacked a bit there; I’ll pick it back up this week.

Did you get a long weekend, too? How’d you spend it?

What’s your favorite yoga pose? Do you also feel like an inflexible doofus when you do yoga? No, just me? Shoot.

And there you have it.

Leave a Reply to Logan @ Mountains and Miles Cancel reply