For the past three years, I’ve spent the first weekend of June at the Skirt Sports Ambassador Retreat. The first year was fun and a refreshing break from house-hunting. The second year was powerful and inspiring. The retreats just keep getting better and better: This year left me feeling connected, inspired, and empowered.

The retreat started Friday night with shopping (of course), a cocktail reception, dinner, and some ambassador awards and a “sneak peek” fashion show. In my recaps of the past two years’ retreats, I discussed being nervous about bringing my introverted, awkward self to these big gatherings of strangers, but I’ve been to enough Skirt events now and have enough connections that I wasn’t nervous this year. Skirt Sports ambassadors are some of the friendliest, kindest people around, and I knew that even if I didn’t spot someone I knew right away, I wouldn’t have to be awkward all alone for long.

Upon arriving, I got my swag bag (full of stellar goodies from event sponsors!) and packet for the race on Sunday, found some friends, and soon began stuffing my face with Illegal Pete’s (if you’re not a Coloradoan, I’m sorry that you’re missing out on Illegal Pete’s. They have the tastiest burritos/burrito bowls).

As dinner wound down, Skirt Sports founder Nicole DeBoom (my girl crush, as you know if you’ve read my blog for a minute) spoke to us about Skirt, about the community, and about our roles not just as ambassadors, but as women in this world. One piece of her advice summed up the weekend and Skirt Sports in general: “If you see something great, say something, even if you feel stupid. Lift and elevate each other.” That resonated with me: How often do we avoid praising each other because we feel dumb, or inadequate? I don’t know about you, but I do this way too often. “Lift and elevate” really stuck with me (literally — I wrote it on a sticky note and stuck it to my work laptop), and I’m going to work deliberately on lifting and elevating, on praising the good in others even if I’m feeling shy.

Once Nicole had us all uplifted and inspired, she and Noelle (Skirt Sports ambassador program coordinator) handed out some awards, which was fun, and then, we got a little sneak peek fashion show into upcoming prints and styles. I can’t show you pictures yet, so you’ll have to be satisfied knowing that some cute things are coming up this fall and next spring.

As the fashion show wrapped up and the evening started to wind down, I slipped away and headed home — I had an hour drive, and we were starting back up at 8:00 the next morning. Saturday’s events started at Noah’s Event Venue in Westminster. We had breakfast, then three speakers: Kara Burns, Mirna Valerio, and Colleen Cannon. Kara spoke first; she is a recovered drug addict whose life has had many ups and downs, but she’s come out stronger on the other side and now works for a nonprofit that helps women who have been released from prison dress and prepare for job interviews. Kara, like Nicole the night before, reminded us to uplift not only each other, but ourselves, leaving us with a message that I think that, as women, we can’t hear too often: “You matter. Your value doesn’t hinge on anyone or anything else.” 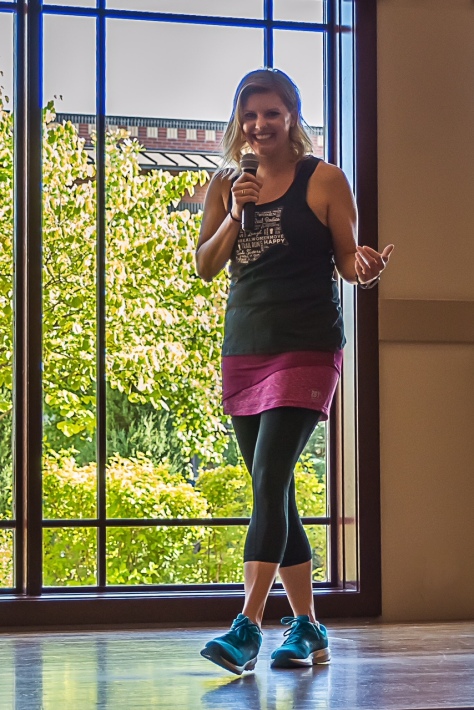 Kara was interviewed on Nicole’s podcast, Run this World, so if you want to hear more about her and her story, listen here.

Mirna Valerio was the next speaker, and unless you’ve been hiding under a rock for the past couple of years, you’re probably familiar with Mirna.

Mirna continued the theme of accepting, appreciating, and valuing ourselves. I could tell she’s a teacher — she kept having us “turn and talk,” which allowed me to get to know another Skirt ambassador whom I had previously known only on Facebook, so that was fun.

We took a little yoga break after Mirna’s talk, and then we had a breakout session, during which we grouped up and had a Shark Tank-style contest to invent and pitch ideas for new products. I’m not creative at all in that regard, so it was fun to hear what everyone else came up with, from convertible jackets/vests (my group) to gaiters to swim cover-ups.

The morning wrapped up with one more speaker, Colleen Cannon, who is a former professional triathlete and now runs Women’s Quest, a company that takes women on surf retreats to Costa Rica. Colleen was a kick to listen to –she had so much energy and lots of little jokes. She talked about affirming ourselves and banishing negative thoughts, and gave us some mental tricks for when we’re struggling. Here’s my favorite: She said that when she was in the running portion of a triathlon and was getting tired, didn’t want to compete any more, etc., she’d imagine little fairies giving her bursts of energy to push her to the finish line. Sounds crazy, but I tried it the next day during the 13er, and it totally works! She also told us that encouraging others gives us a boost of energy and endorphins,and guess what? That worked, too! Try it next time you’re having a rough workout or race: high five someone or imagine little energy fairies. See if it works for you.

The morning wrapped with a grab-and-go lunch courtesy of Mad Greens, and we headed en masse to Davidson Mesa to walk part of the trails that would hold the 13er the next morning. 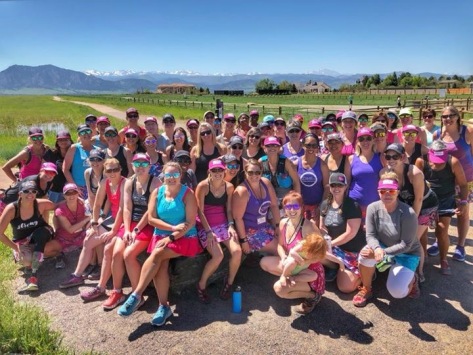