The summer so far has been busy, but in a good way — I’ve done some work, sure, but I’ve also had a lot of adventures. Which is why we’re now a month out from the Skirt Sports 13er and I’m just now recapping. Oops.

The 13er is one of my favorite races of the year. I first did it in 2015, before I was a Skirt Sports ambassador. That was just a few weeks after the Lincoln Marathon, so I treated it as a get-back-to-training run. In 2016 we were job-shopping, house-shopping, and generally stressed out, so I didn’t race the 13er, but still came in third. That ignited my competitive spark, but I was injured and spectated instead of running in 2017, This year, I’m still trying to get back into pre-injury shape, but I wanted to race, to test my limits and see where my fitness is now. And, to be honest, I really kind of wanted to win. Winning, of course, all depends on who else shows up, so I kept that goal in the back of my mind and told myself to just run the best I could and see what happened.

The race starts at 6:30 a.m., which seems early but is actually a blessing, as that Colorado sun gets warm fast in June. I got up around 4:30, ate a banana with peanut butter, drank some coffee, annoyed my husband, and arrived at the start a little before 6 — just enough time to hit the porta-john, say hi to some friends, run a warm-up mile, try to hit the porta-john again but realize the lines were too long, and pose for a start-line picture with Kate.

The gun fired right on time, and off we went! I tend to start races way too fast, so my mantra for the first mile was “ease into it.” The first mile is slightly uphill, so that makes starting at a reasonable pace easier, but even so, I still started faster than I should have, ticking off the first mile in 6:49. My goal time for the race was 1:35 — about 7:15 pace — so that mile was much quicker than it should have been. I was already in the lead, and I wanted to keep it and not get passed at mile 12, so I eased up on the pace, hitting the next few miles right on target: 7:13, 7:19, 7:19, 7:14, 7:04.

The course was different than in years past: This year, it made two loops of Davidson Mesa, instead of one big loop including the roads around the mesa. Miles 5-6, then, meant meeting 5k and 10k-ers as they started the climb up onto the mesa and I hustled down it. This was my favorite part of the whole race. The energy was incredible: Women were pushing themselves; Running Start beginners were achieving something they never thought they could, and everyone cheered for each other, high-fived, or just smiled.

The halfway point was just outside the finish line (by the porta-johns, which I kinda needed to use but I didn’t want to lose my lead); I turned around and headed back up the hill and onto the mesa. Once back up the hill and away from the crowd, though, my energy started waning: my legs were tired, it was getting hot, and there was still a lot of race left. I wanted to walk, or at least slow down. But I knew the second-place woman was not far behind me, so I thought back to the tricks Colleen Cannon had given us the day before. I imagined little energy fairies, waving their wands and giving me bursts of energy. I imagined a finish line fishing pole reeling me in. And I smiled. And you know what? It worked!

I rounded the lake and headed back up to the mesa, knowing I had about 2 minutes on the second-place woman (because I asked at the aid station). I just had to hang on for a few more miles. As I headed back toward the finish line, I remembered why I love/hate out-and-back and double-loop courses: It’s awesome to get high-fives and see everyone, but when you’re using up the last of your energy, dodging the back-of-the-packers and walkers gets frustrating. But no matter: I kept imagining those little energy fairies,  and I just kept pushing. That uphill first mile turns into a downhill final mile, so I felt like I was flying as I dropped down the hill, rounded the corner, and saw the finish line.

It’s a small race. It wasn’t a competitive field, and 1:34:14 isn’t my PR. But none of that mattered. What mattered was that I did what I set out to do. I pushed through the hard places, fought the mental battles, and won the race!

Skirt Sports founder Nicole DeBoom met me at the finish line with a big hug, and I got my medal and some water, kissed Jordan, and ate some cake while we cheered in the other racers. 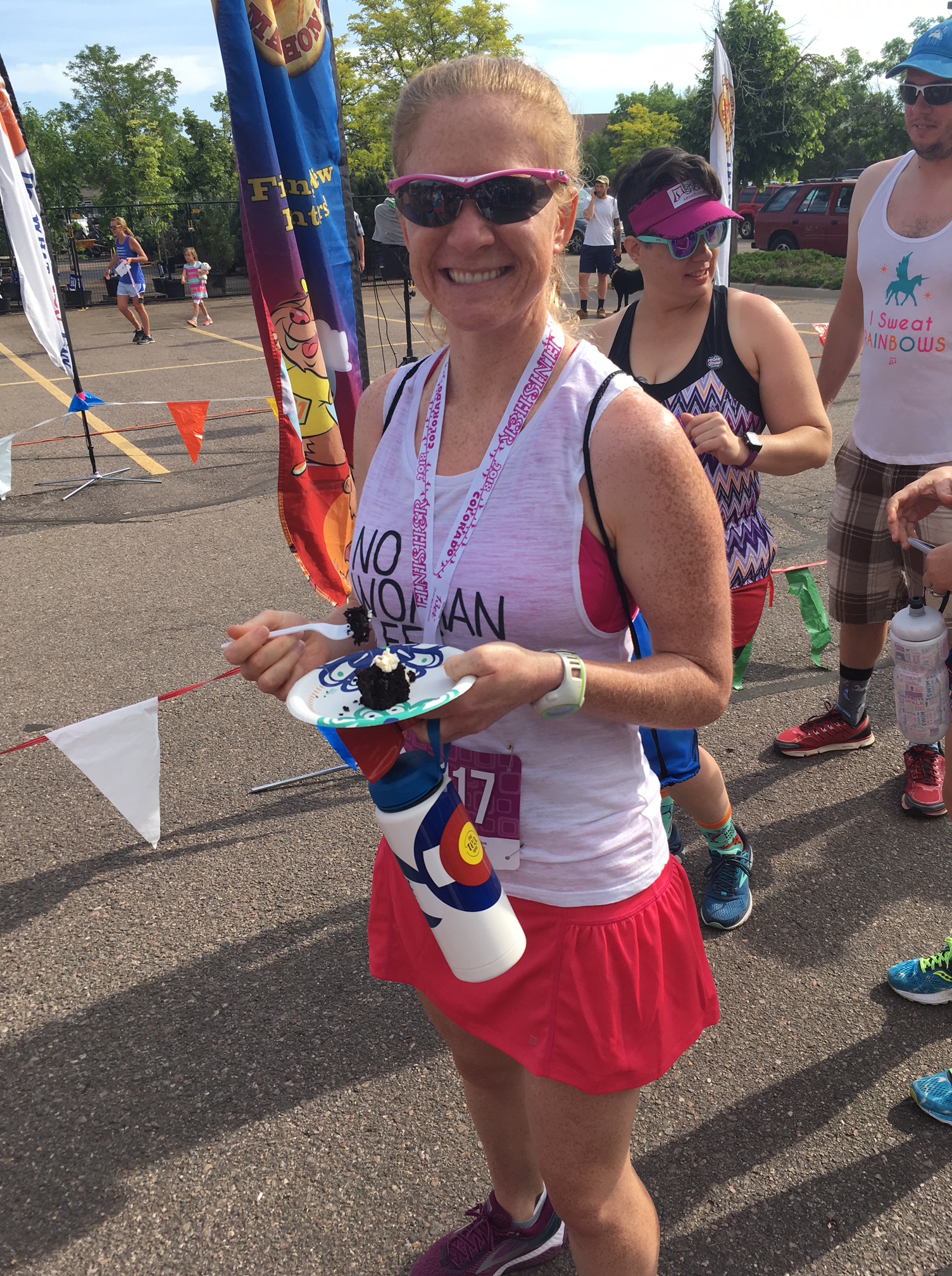 What I love most about this race is that, while I was on Cloud 9 after winning and received more than my fair share of congratulations, so did everyone else. Nicole stayed at the finish and greeted every runner the same way she’d met me: with a hug, congratulations, and a huge, genuine smile. Spectators cheered and even made cheer tunnels for the final finishers:

At this race, whether you’re the first finisher, the last finisher, or somewhere in between, you are greeted as though you’re a world champion. The sense of community here is unlike anything I’ve ever experienced. Winner or not, I can’t wait to run this race again next year. 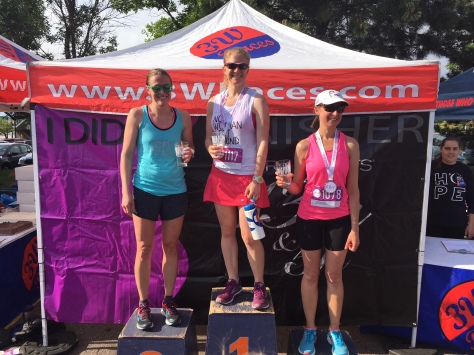 What’s your favorite race? Should I do it?

Which course type do you prefer: out-and-back, loop, or point-to-point?