It’s Christmas break, baby! My apologies to those of you who have to go to work the next couple of days. I don’t, and it’s awesome, although a snow storm is messing up my Christmas travel plans. Oh well. You can’t win them all.

This was the last week of school, so there was not a lot of blogging done, but it was another solid week of base building.

I got up at 4:15 so I could get in my entire workout (7 miles plus 30 minutes of strength work), as the high school band and choir concert was scheduled for that evening. Halfway through my workout, I got the call that school was cancelled for the day, thanks to this: 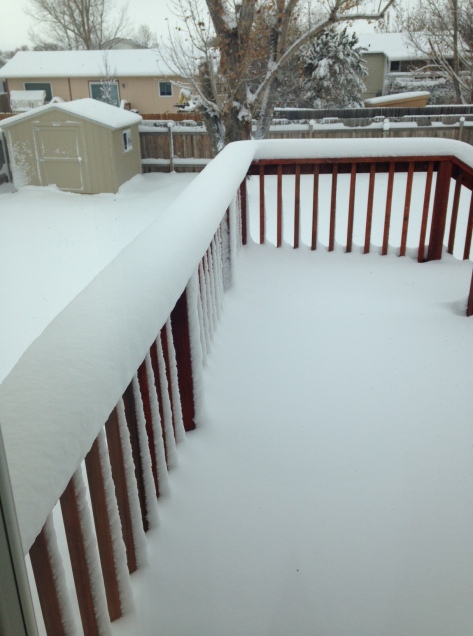 So I got up early for no reason, but it was nice to have it done and enjoy the rest of the snow day.

6 miles of hill intervals. Again in the early a.m., but this time, no snow day.

The concert was rescheduled for 7:00, but since Wednesday and Thursday were finals days, I figured that I wouldn’t have to stay as late as usual after school, so I could come home and get in my run and strength training between school and the concert. Too bad I forgot that I had a meeting after school. I managed to do another 7-miler, but no strength. Oops.

I got up early to make up Wednesday’s missed strength session, and then in the evening was the fun run I accidentally organized. About 25 people had said on Facebook that they’d come, but Monday’s snow and ice were refusing to melt (rare for Colorado… normally it melts off in a day or two). Most people decided not to run in the dark and on the ice, so there were only five of us (and two walkers). But it was still fun, and hopefully next year, we’ll get better weather and more participation. 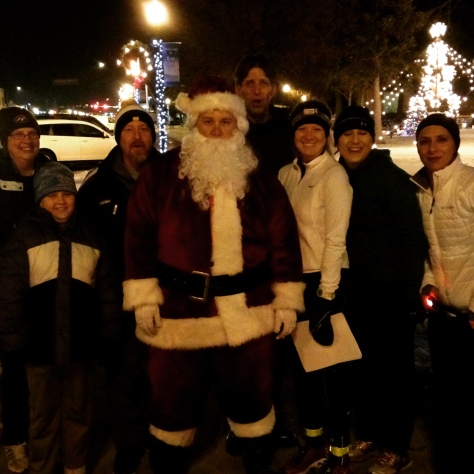 We started by saying hello to Santa (a.k.a. our friend Donny), then ran 4.5 slow  but fun miles. I ended up with 4.75, as Jaylin’s knee was bugging her and caused her to walk, so I backtracked and caught up with her again after I finished. 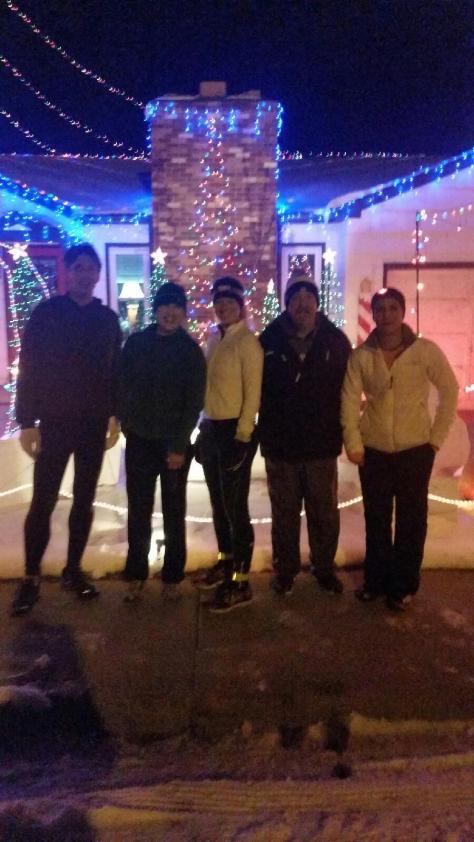 7 easy miles… although they weren’t that easy, as I was dodging ice and snow the whole time.

15.1 miles, pretty much exactly like the day before. I couldn’t run the country roads (too much snow piled on the shoulders) or at the park (they don’t plow it), so I was limited to running the town’s streets/sidewalks (most people had shoveled, at least). In case you haven’t gathered this from my blog’s name, this town is not big. In order to get in my 15, I literally ran up and down almost every street in town, some twice. It was not the most exciting run of my life, but it’s done. 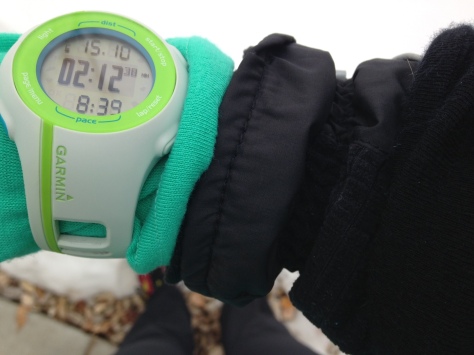 A hot shower, warm sweatpants, fuzzy socks, and cocoa were the best things ever after this run. 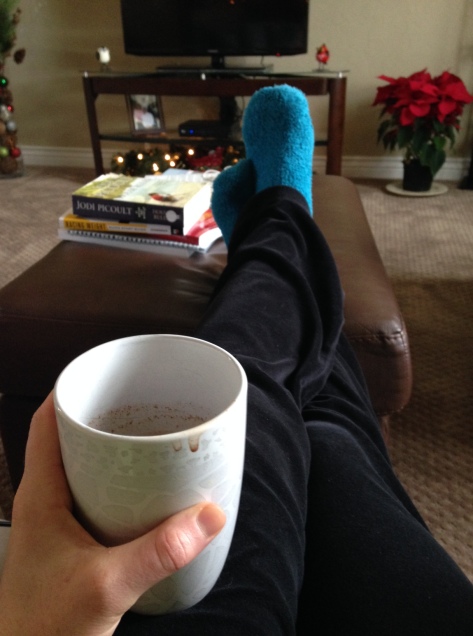 The name of the game this week is “just get something in.” And then next week, marathon training starts!

Have a wonderful Christmas!!

What are your holiday plans?

Any tips for running on ice without hurting myself? This might be a loooong winter training cycle…

Yesterday, J and I were having a nice, leisurely morning, making a plan for the day over coffee, and I said that I wanted to drive around and look at Christmas lights. That reminded me that I’ve heard of running clubs doing Christmas light runs, and I wondered if anyone local would be interested in running around and looking at lights sometime. I posted a Facebook status and got a couple of interested replies, so I figured we’d pick a date and a general route, just running around at whatever pace for whatever distance, based on whoever showed up.

A couple of hours later, J ran some errands downtown, where he bumped into some friends of ours from the radio station. He mentioned my run idea, and they said that if we did it the same night as one of their other events, they’d provide hot chocolate when we finished. They even suggested a name (“Beat the Holiday Bulge”) and suggested that we also plan a one-mile loop for kids.

When J told me all of this, I said, “Wow, this is turning into an event!” A little while later, my friend Jaylin texted me and asked if there was anything she could do to help. And this conversation was had: 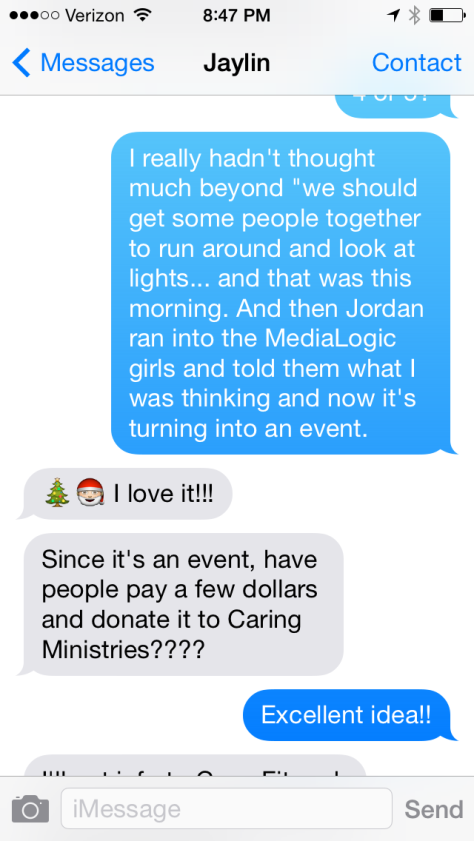 And thus, the Beat the Holiday Bulge Festive Fun Run was born. J and I did our lights-looking drive last night. I created a Facebook event, Jaylin shared it, and as of right now, we’ve got at least 21 people signed up to run. If they each donate $5, that’s $105 for the local food bank. Not bad for a randomly planned event!

If you’re local (or feel like taking a random Thursday night road trip to the plains), come join us December 18 at 5:30 in Fort Morgan’s City Park. It’ll be a good time!

In addition to planning this fun run, I did some exercising this week. Here’s how it went:

4 miles easy and 20 minutes of strength training. I went to the gym, since I needed a couple of machines for my strength routine, and they were having their holiday open house. They had a DJ, so that made working out a little more fun than usual. And they were snapping pictures, so I stole this one from their Facebook page. 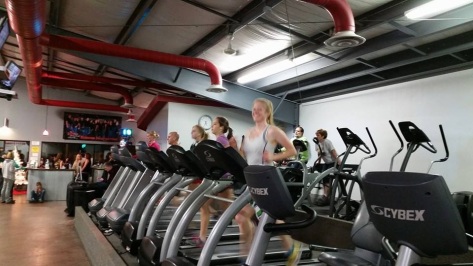 4 miles easy and basement strength training. I took a super artistic photo for Instagram when I was done. 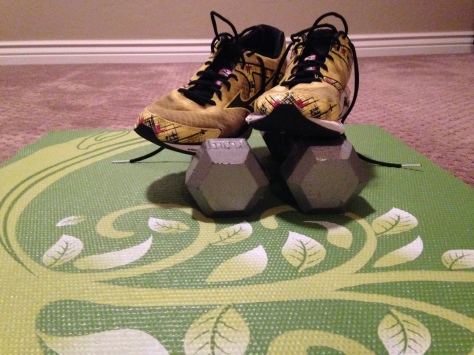 I cross trained two weeks in a row! Crazy talk. I did some intervals on the spin bike and then lifted for 25ish minutes. And I was inspired by a sticky note on the paper towel dispenser in the gym bathroom. 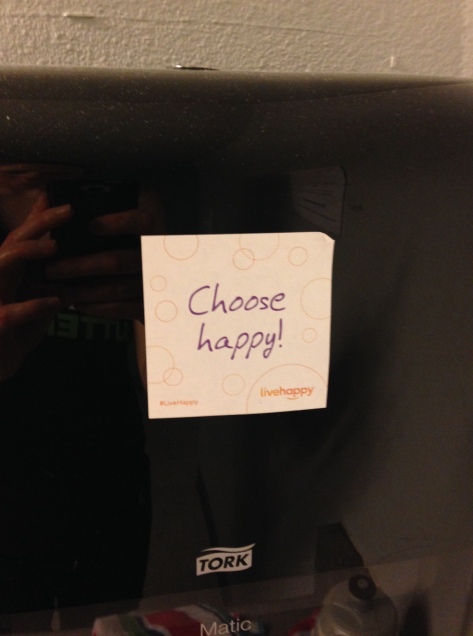 5.5 easy miles as I planned a tentative route for the newly-planned lights run.

12.5 miles. It was flippin’ gorgeous out today. I wore shorts and was wishing I’d worn short sleeves, too!

This coming week should be  little higher mileage, which is good — marathon training starts the week after Christmas, so I need to keep building my base!

And that’s all. Have a great week, friends!

I can’t think of a good reader question. Tell me something interesting.