A few weeks ago, my Internet friend Logan sent out an e-mail in search of pacers and a crew for her upcoming 100-mile race. The race was Labor Day weekend, and I had no other plans. Logan and I had been trying to run together all summer and it had never worked out, plus I’m always looking for an excuse to get into the mountains, so I wrote her back and said I was in for crewing and pacing duties. I wasn’t really sure what to expect, but I’m so glad I volunteered — this was one inspiring experience!

(This post is light on pictures… most of my time at the Hideaway 100 was in the dark, and the pictures I did take were of Logan. I feel like she should get to post them first.)

Logan started running at 5:00 Saturday morning, but I had an appointment that afternoon and didn’t get to Winter Park until about 4:00 p.m. I met the rest of the crew, and we headed up to wait for Logan at an aid station at around the halfway point. Before she came in, this guy did: 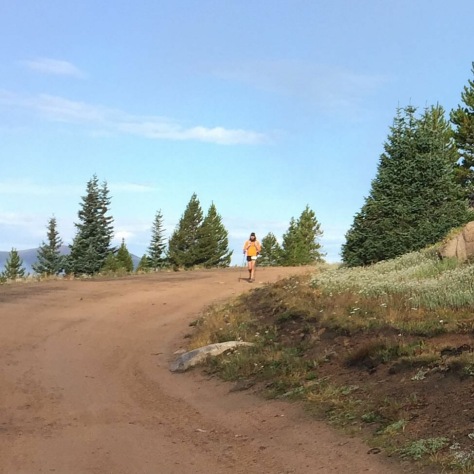 I totally stole this picture from Bob’s (one of the other pacers) Facebook page. Anyway, this guy was cruising in sandals, and he was FAST! He stopped at the aid station, ate a bit and chatted easily with the volunteers, and then took off again at lightning speed.

Not long after Mr. Speedy Sandals came through, Logan made it to the aid station. She was looking super strong and was in good spirits.

She dropped off her first pacer, Katie, and picked up her second, Kevin. While they ran, I took Katie back down to her car. On the way down, while it was still daylight, we saw a moose (and a crazy woman walking up to it to take its picture). On my way back, in the dark, I caught something out of the corner of my eye. I turned my head, and a massive moose was running right alongside the car! I decided then that Logan and I were going to make a LOT of noise while we ran. No midnight animal encounters for us, thanks!

I made it to the next aid station not long before Logan came in. She traded Kevin for Bob, and soon they were off again. While they ran, I snagged an hour-long light nap in the back of Logan’s Subaru. My fear of oversleeping and missing their return meant I just kind of drifted in and out, and soon Bob texted us to let us know when they were close. I sneaked off to find a bush, layered up, and got myself ready to run.

When Logan came in, she explained that she had a pretty wicked blister but didn’t want to pop it, so we’d try just hiking. I didn’t admit it at the time, but I was SO glad we hiked. We climbed up to about 12,000 feet, and my 3500′-dwelling legs and lungs were burning. Plus, it was FREEZING! I didn’t complain, though — the number-one rule of pacing is that you suffer in silence and try to keep your runner’s spirits up, because no matter how rough you’re feeling, she’s got over 50 miles on you! I told myself not to be a weenie, and tried to channel some of Logan’s general badassness.

Now that we were back where I could breathe, I tried to keep up a steady stream of chatter. I’m not usually a very talkative person, but I figured that the best way to help Logan stay out of the pain cave — or at least out of her own head — was to jabber, so jabber I did. Logan was actually still in good spirits (admirable — I would’ve been a bear after 70+ miles!), so we actually had some conversation; it wasn’t just me yammering on. (But mostly it was). We hiked a lot and stopped at an aid station to pop Logan’s blister, which had shifted and become unbearable. Once it was popped, she was able to run a little more, and  after what seemed, remarkably, like a short while, we were back at the final aid station, where Logan picked up Deidre, her last pacer, and headed toward the finish.

Bob and I ate some aid station food (best. bean burrito. ever.), then headed down to wait for Logan to cross the line. The early morning cold had us shivering, so we alternated sitting in Logan’s car with the heat blasting and jumping out to see if she was coming. We watched another runner, who had leapfrogged with Logan for most of the race, finish and collapse in a heap, a mixture of exhaustion and elation. We chatted with a volunteer, one of the many amazing volunteers out there that day and night. And then, finally, we saw Deidre coming up the sidewalk, so we knew Logan was close.

Within seconds, she came into sight, still running. She managed to JUMP as she crossed the finish line (I have no idea how she had the energy for that, but check out the awesome picture on her blog), and then she was done and allowed to finally sit down.

Crewing and pacing Logan was an incredibly inspiring experience for me. Watching her push through the hard, dark places and overcome them to finish the race left me admiring her, of course, but it also made me wonder just how much I too could do. Seeing the wicked-fast winners come through the aid stations left me in awe of the human body’s capabilities. And chatting with the volunteers, most of whom hadn’t slept, who bent over backwards to help the runners with no thought of reciprocation, and many of whom were gearing up for the 50k racers who started Sunday morning, restored some of my faith in the goodness of human nature.

Will I ever run 100 miles? No, probably not. But pacing and crewing was extraordinary, and if I get another chance to pack that much inspiration into one short weekend, you can bet I’ll sign right up.